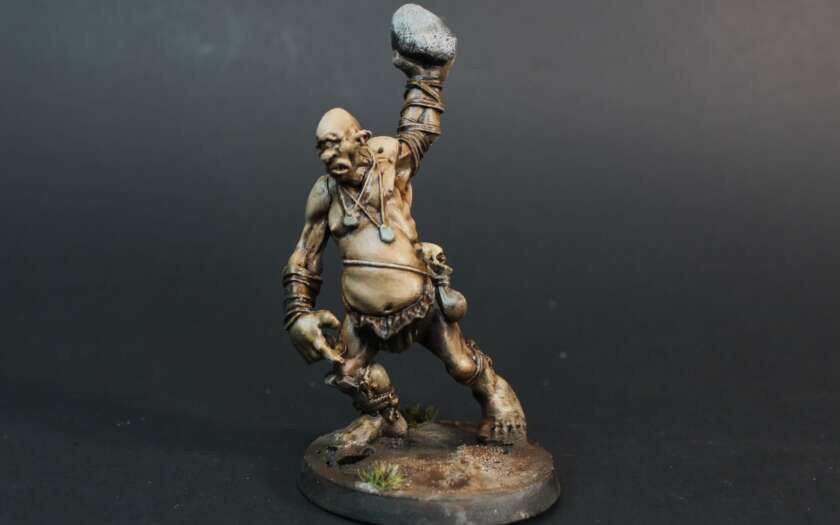 I haven’t painted many fantasy miniatures until very recently. I had assembled enough miniatures to play Frostgrave a while ago but finishing the paint job eluded me.

Oil paints helped me finish these faster. I was concerned the extra oil painting extra step would make it take longer but given that my acrylics were just the base colors (mostly), it was a timesaver.

I like the “Blanchitsu” style of painted miniatures. It is more achievable that going for a super crisp ‘eavy metal style; which takes way way to long if you actually want to play a game. Also, crisp and colorful has a danger of making miniatures look like cartoony anime.

I want my models to look like art, not toys.

Blanchitsu is all about contrast. I found that strong contrast looks great on the table because you are not looking very close at the miniatures when you are playing a game.

I still haven’t played any modern skirmish fantasy games yet but there are three I am excited about.

Frostgrave has been something I have wanted to play for some time. My terrain collection is definitely more scifi but I think get away with one fantasy house and some rocks and trees.

The newest thing these days is “adventure wargaming”; a term invented by Ivan Sorenson who wrote the FiveCore and related games. Five Parsecs from Home was his first game in print; which I happily pre-ordered a physical copy of and have been enjoying for the last six months. It is my favorite game right now, by far.

The third edition of Five Leagues from the Borderlands will be out sometime this year. I own the 2nd edition but am waiting for the 3rd edition, which will be more polished and available in print. It uses a similar base ruleset as Five Parsecs. Melee combat is more dynamic though but we will see how this changes in third edition.

Another game I pre-ordered was Mork Borg: Forbidden Psalm. I wasn’t sure if I would like it though, so I only bought the pdf version. I ended up printing it into a little booklet, in black and white.

This format was perfect for such a small silly game. It is heavy on theme, light on rules. I love messy energic ink drawings, so the fact that the game is so basic doesn’t bother me that much. We will see what i think when I actually play a game though.

The FiveCore rules are more similar to 40k because they avoid hps and instead rely on d6 and stun counters.

Mork Borg and Frostgrave/Staragrave games are more inspired from Dungeons and Dragons. They use d20 dice and Mork Borg uses specific dice for specific weapons. Frostgrave/Stargrave keep the dice rolling minimal at the cost of some extra math in your head.

Regardless what dice you are rolling, keeping track of HPs in skirmish games adds a level of record keeping I am not super fond of. This is one of the reasons that the FiveCore games are more appealing to me. The only downside of games that rely on d6s, is that you will need to roll multiple times. FiveCore and 40k both require a roll to hit, a roll to wound and sometimes an armor save roll. This is easily solvable by using small (12mm) six-sided dice of various colors. I roll a handful of dice at once. This is a trick I picked up from back when I used to play Warhammer 40k.

Both Five Leagues from the Borderlands and Forbidden Psalm are solo-first games. The latter relies on specific scenarios to play the game.

Five Leagues is much more dynamic. The ongoing campaign is both structured and randomly generated. It will be available here when the third edition come out:

When I first discovered custom ink washes, I painted this wizard. That was over ten years ago! He is still one of the best miniature I have ever painted.

In order to play Frostgrave, you need a few wizards. Here are a few I painted.

The two above are from Reaper Bones 4. It was a Kickstarter from a few years ago. I am not a fan of the plastic it is made with. It is soft so there can be problems with weapons being bendy. However, rebasing them was much easier because the plastic is so easy to cut.

One of my favorite parts of the set are the villagers.

Here are the figures I am using in a warband.

Painting enough miniatures for opponents in these games is super intimidating. I established a short list that I could use on different games.

These are the Cultists from a D&D boardgame which had terrible rules but nice miniatures.

Mork Borg: Forbidden Psalm is a miniatures game that can be played solo, coop or pvp. It is short simple game that is heavy on character, light on rules. I found a few miniatures in my old Reaper Bones 4 Kickstarter collection that would work, so I painted them up.

I am finishing up painting a squad of skeleton warriors. I finished painting some zombies, giant rats, bears and dogs. I will share those in a future post.

I have il paints ready to put the final touches on a Frostgrave all-female warband and Frostgrave Cultist warband. Even if I don’t play much Frostgrave, these miniatures will be great to use in Five Leagues from the Borderlands.